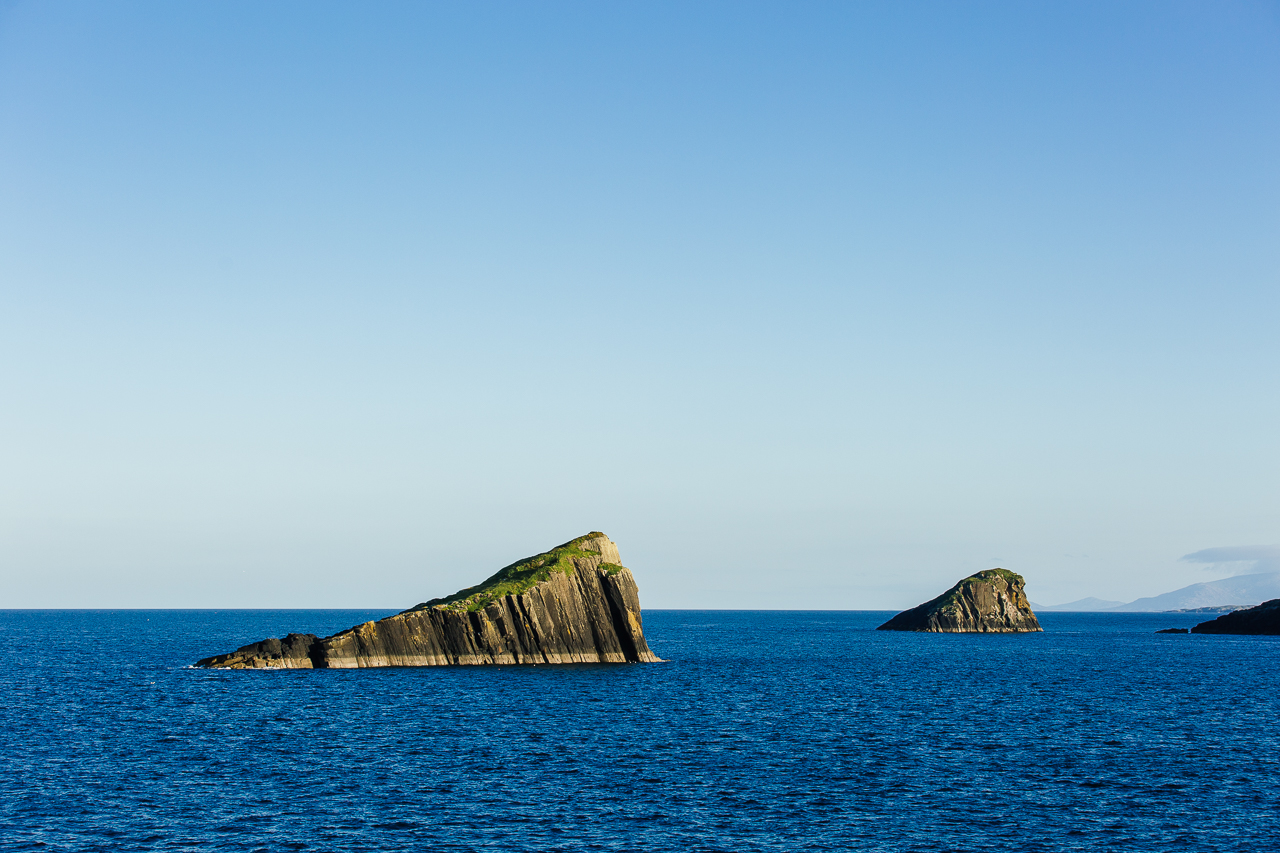 Golf on the Outer Hebrides in Askernish, Scotland

Global wanderer and weekend hacker Ben Renick traipses the mystical landscapes of the Isle of Skye in pursuit of Old Tom, mythic Askernish, and the Outer Hebrides.

The Isle of Skye can be summed up in a word – remote. Known for its rugged landscapes, the Scottish Isle’s sprawling mix of lochs, peninsulas, mountain ranges, and rock formations are as mystical as they are jaw-dropping.

My wife Anne and I have travelled to Scotland with Caddie’s intrepid Editor-in-chief Will Watt and his wife Rosie, somewhat crashing their honeymoon. After five days at Glastonbury Music Festival, the four of us drove 1100km north to get here, the road trip via Edinburgh providing a much-needed sense of calm after a hectic festival experience. But as beautifully calming as Skye is, there’s an ulterior motive to our pilgrimage: South Uist Island, a ferry-ride away and home to the ‘Old’ Tom Morris-designed Askernish Golf Club. First, a few days to unwind on the ‘misty isle’.

The drive over the bridge from the UK mainland takes longer than expected due to the amount of photo opportunities at every bend in the road – and there are many bends. As we take in the view over the paddocks, across the ranges and out to sea, the sun begins to set and we finally reach our resting place for the next three nights.
A few days on the Isle of Skye really gives you an insight into island life. The roads are largely one-way, with ‘turn outs’ strategically positioned to allow passing and overtaking. The ‘thank you’ wave (of which there are many incarnations) quickly becomes a much-used custom, more so for me after some stern words of advice from a local bus driver after failing to use a turn out when I should have. Portree is the biggest town on the island and is surprisingly bustling with tourists, to the point where it’s near impossible to get a table for dinner at one of the few pubs, let alone a car park. The coastal drives are magnificent, past the sea of quaint white cottages which are scattered across the fields of grazing cattle and sheep. I didn’t have time to research it, but it seems likely that anything other than a white, single storey cottage is against local planning regulations. Skye is a crofting community, a ‘croft’ being a small holding of land, usually of only a few acres. There are more than 2,000 crofts on the Isle of Skye but only a few are large enough for the crofter to earn a living solely from it, so most band together in a social system of working communities to make a living.

Given its epic landscapes, Skye is also the land of myths: like The Storr on the east coast, a collection of large zeniths of rock formed by landslides in ancient times. Legend has it that the giant Old Man of Storr was buried with his fingers sticking out, creating the peaks. Or the Fairy Pools, a natural waterfall phenomenon that highlights vivid blues and greens in the water, causing a supernatural feel akin to the woods of Twin Peaks. It is no wonder the makers of Game of Thrones chose Skye as one of the premier locations for filming.

The Isle of Skye and The Outer Hebrides, Scotland 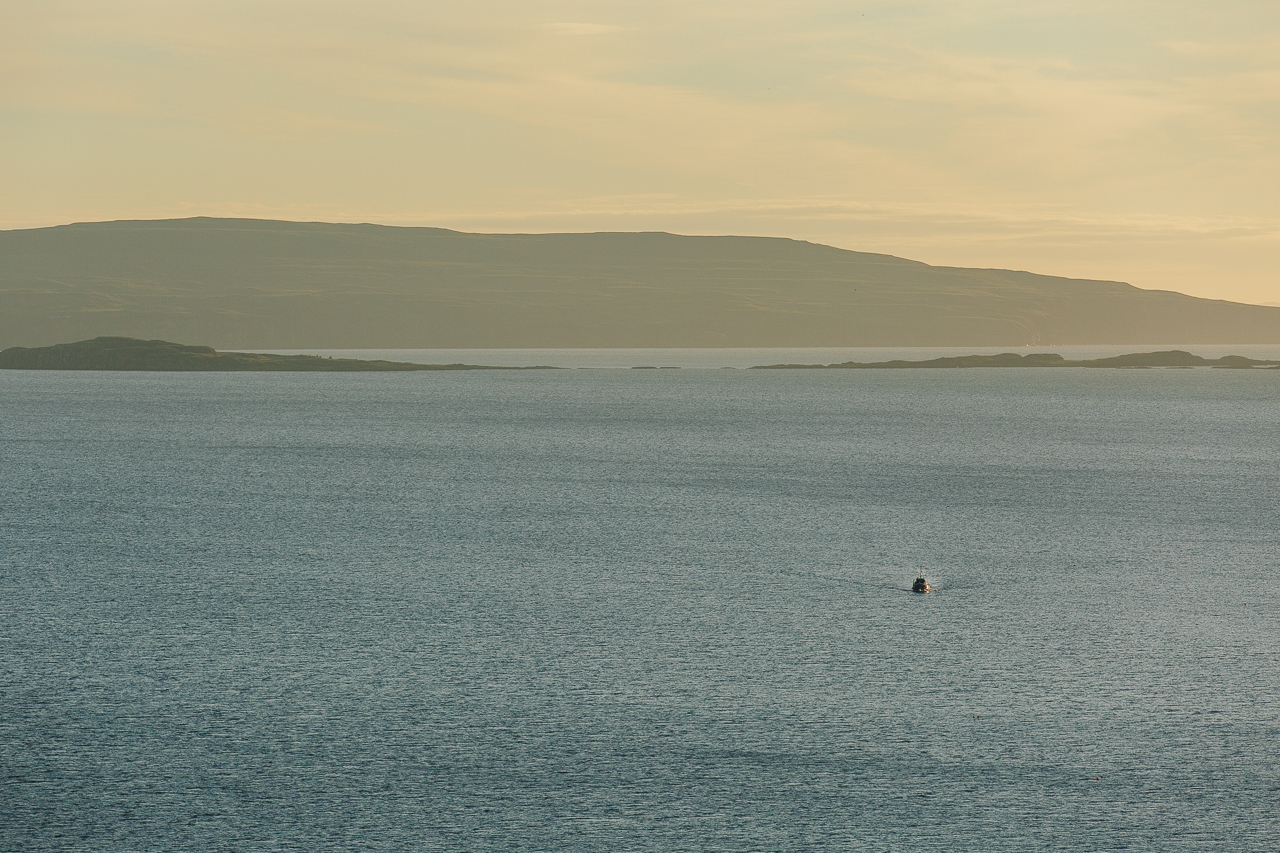 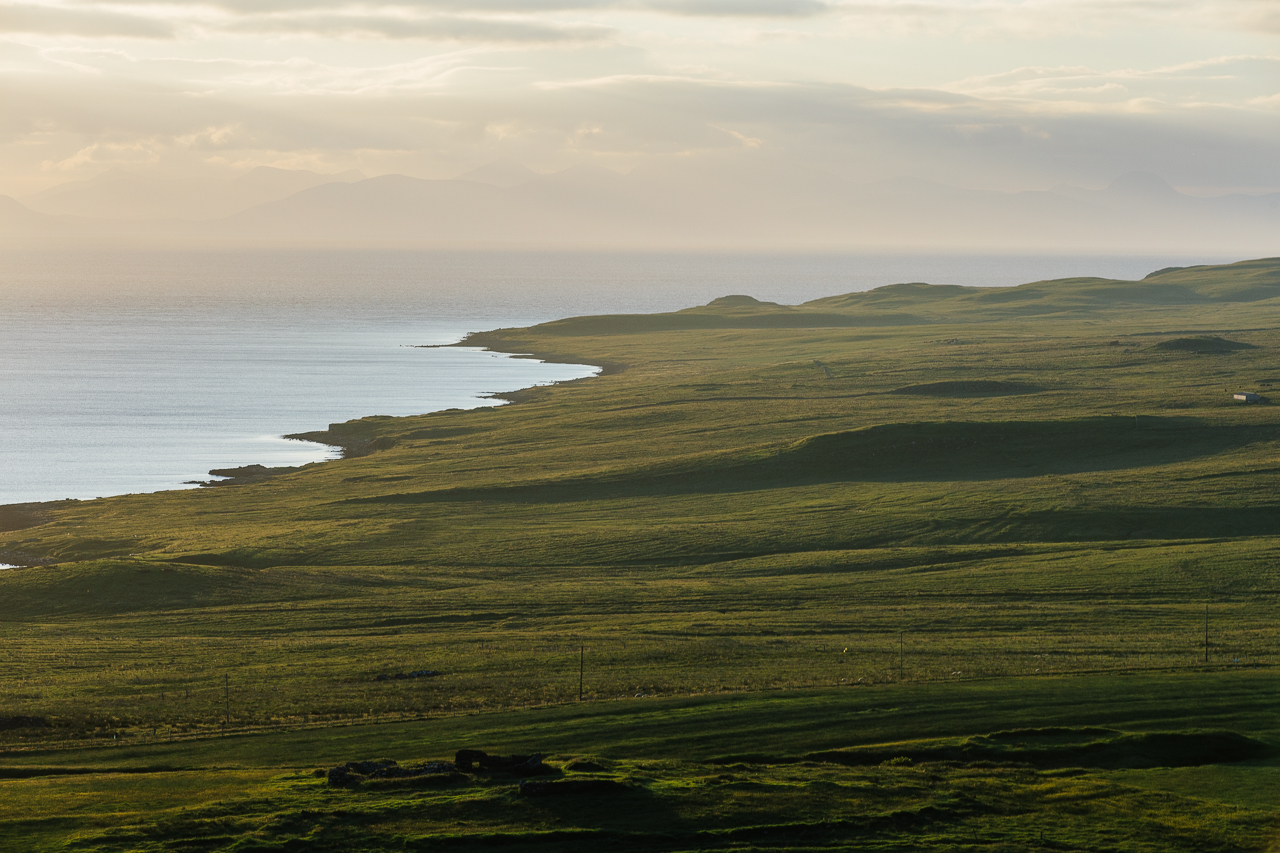 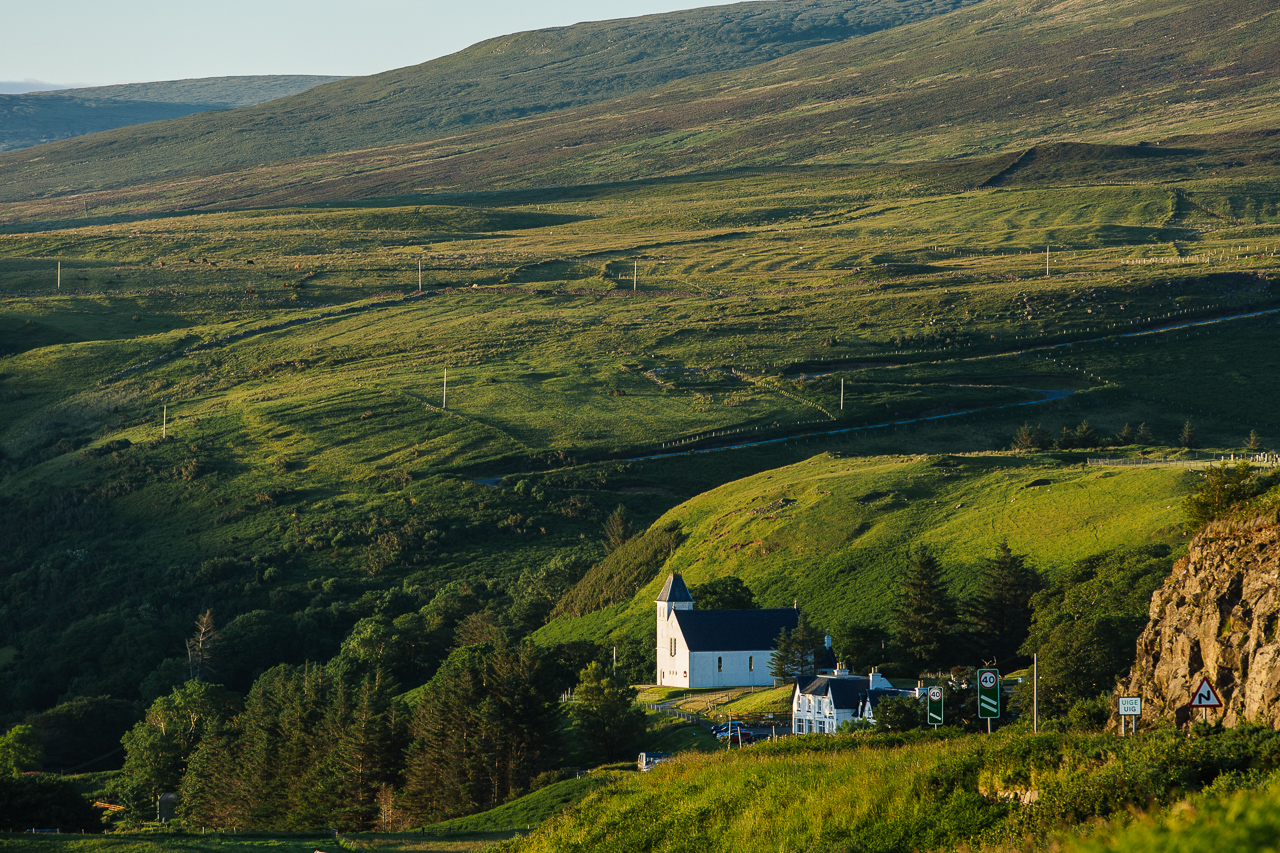 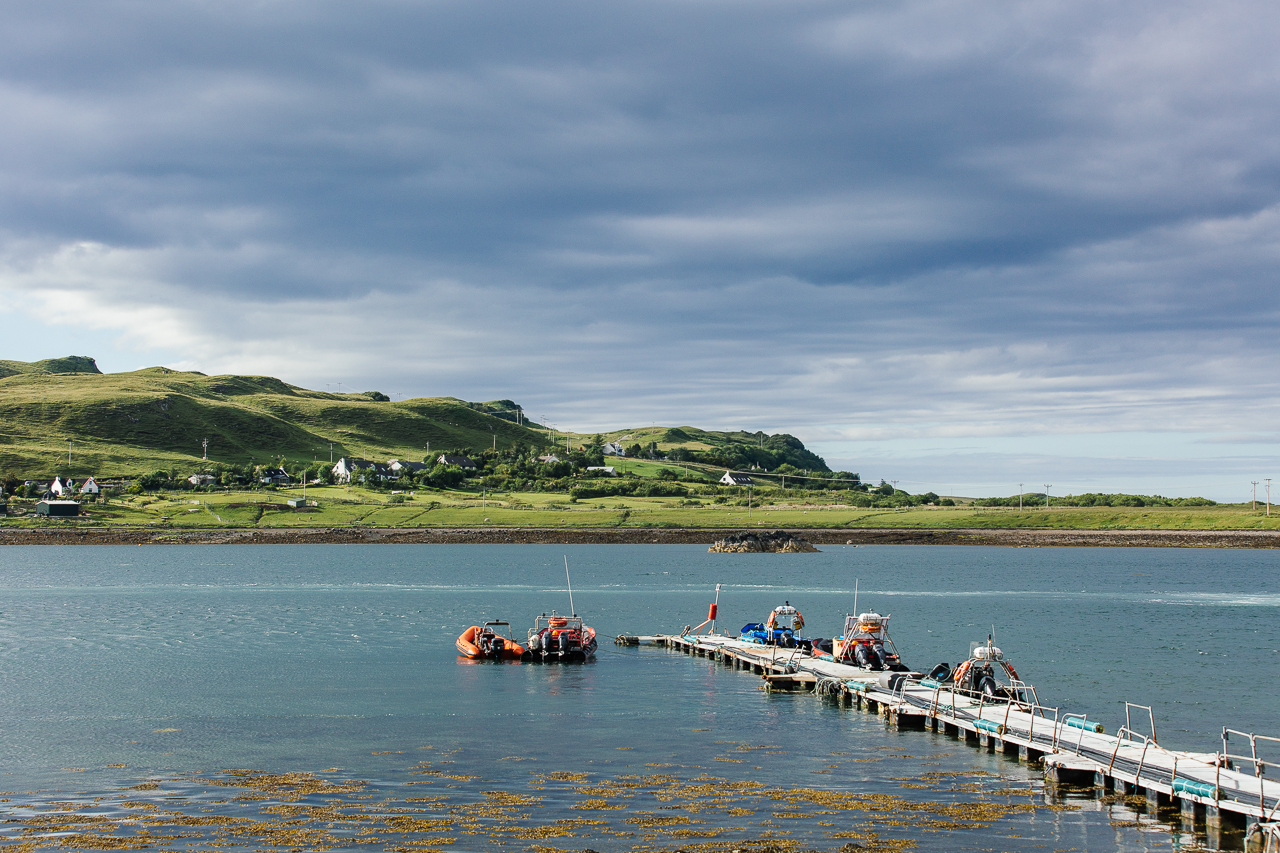 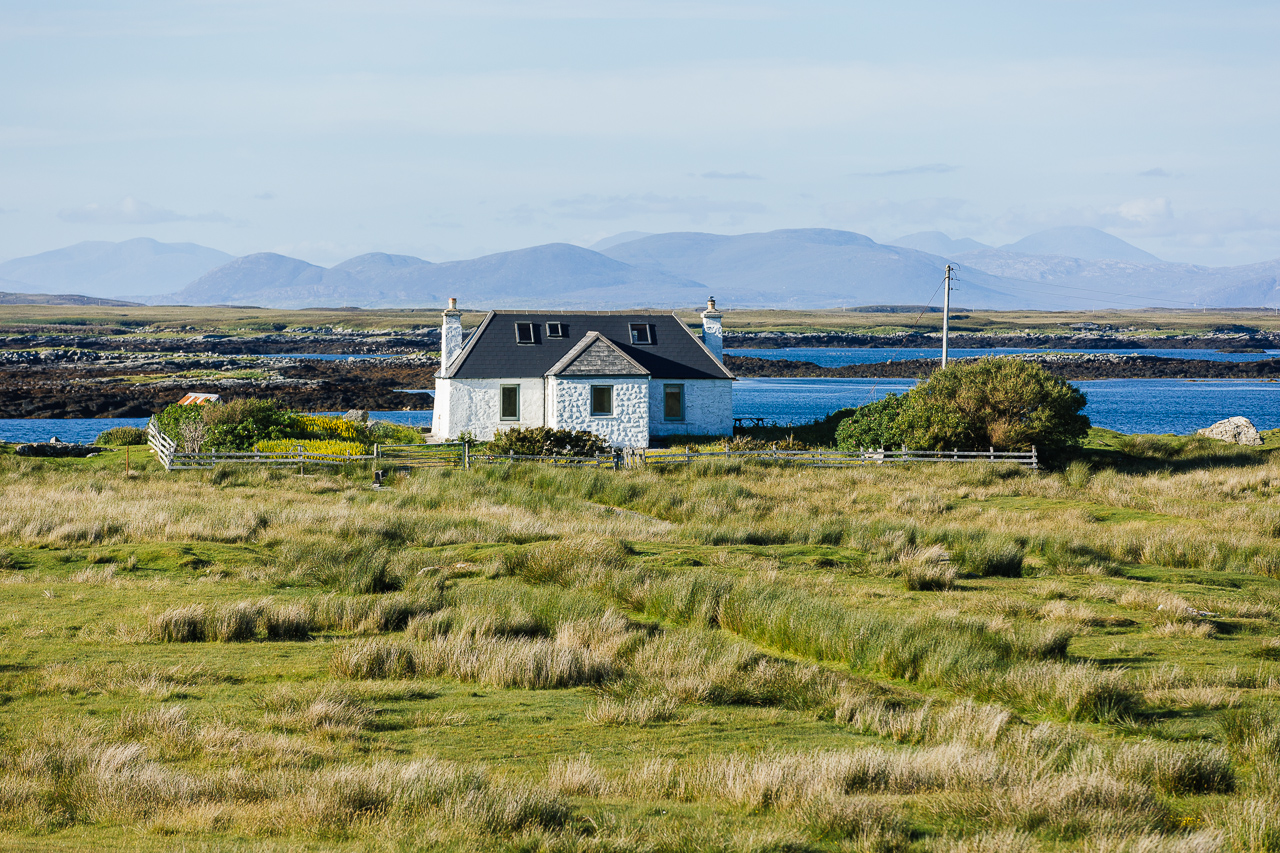 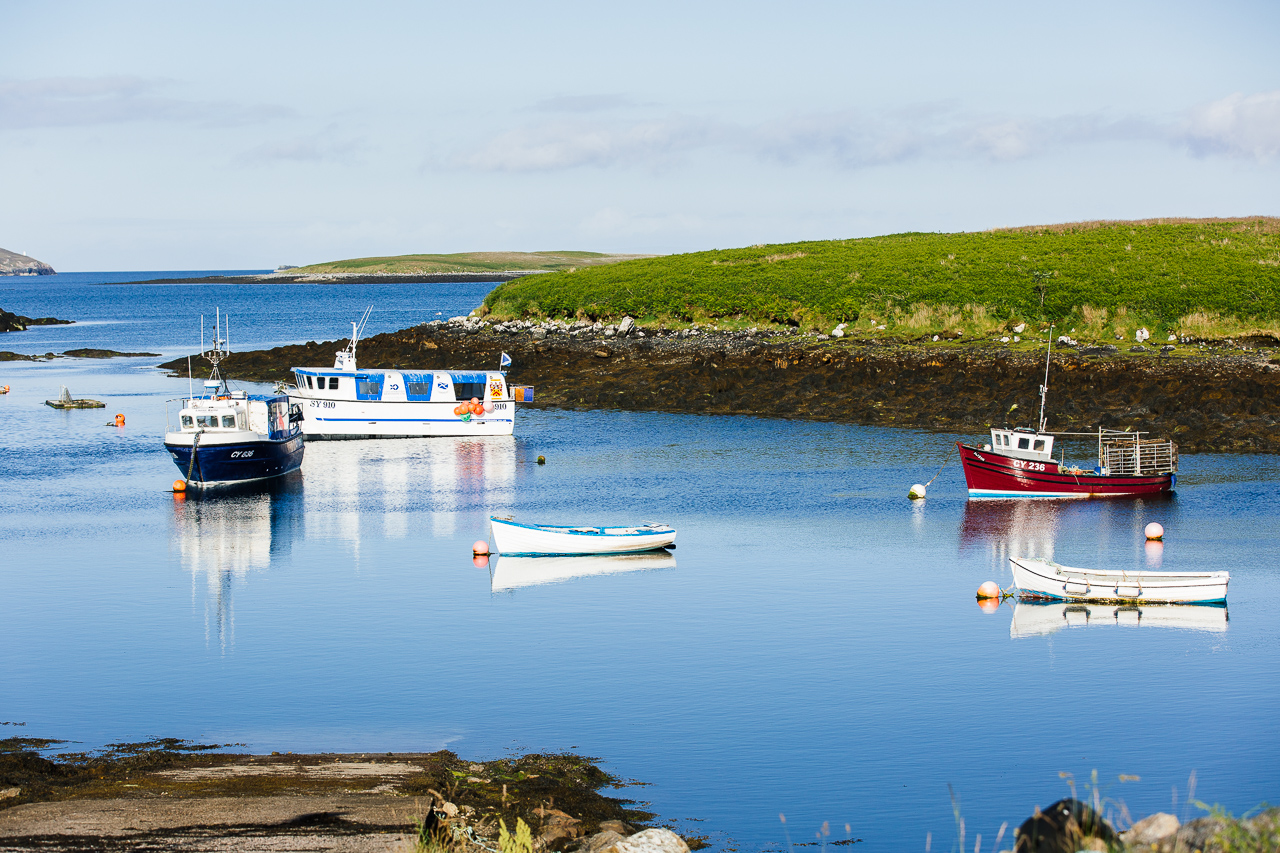 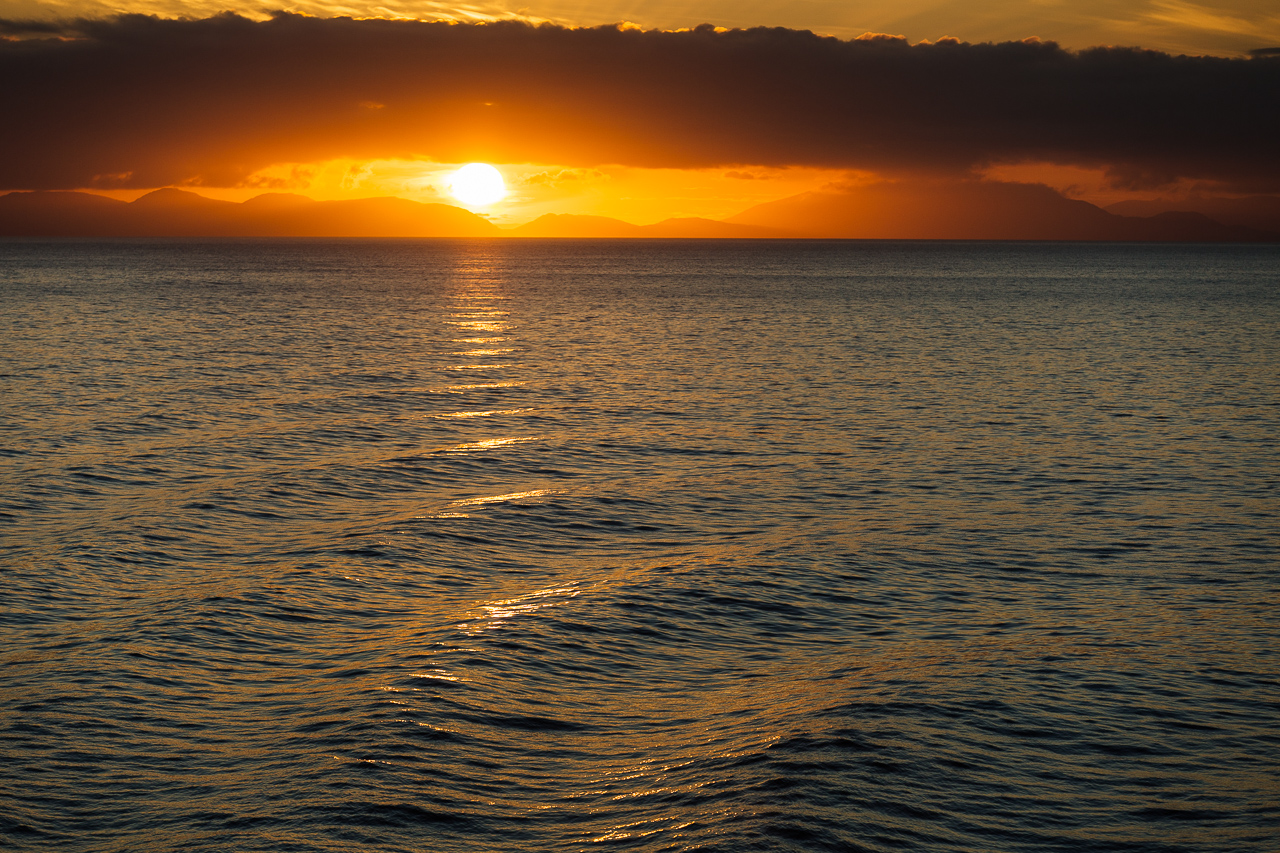 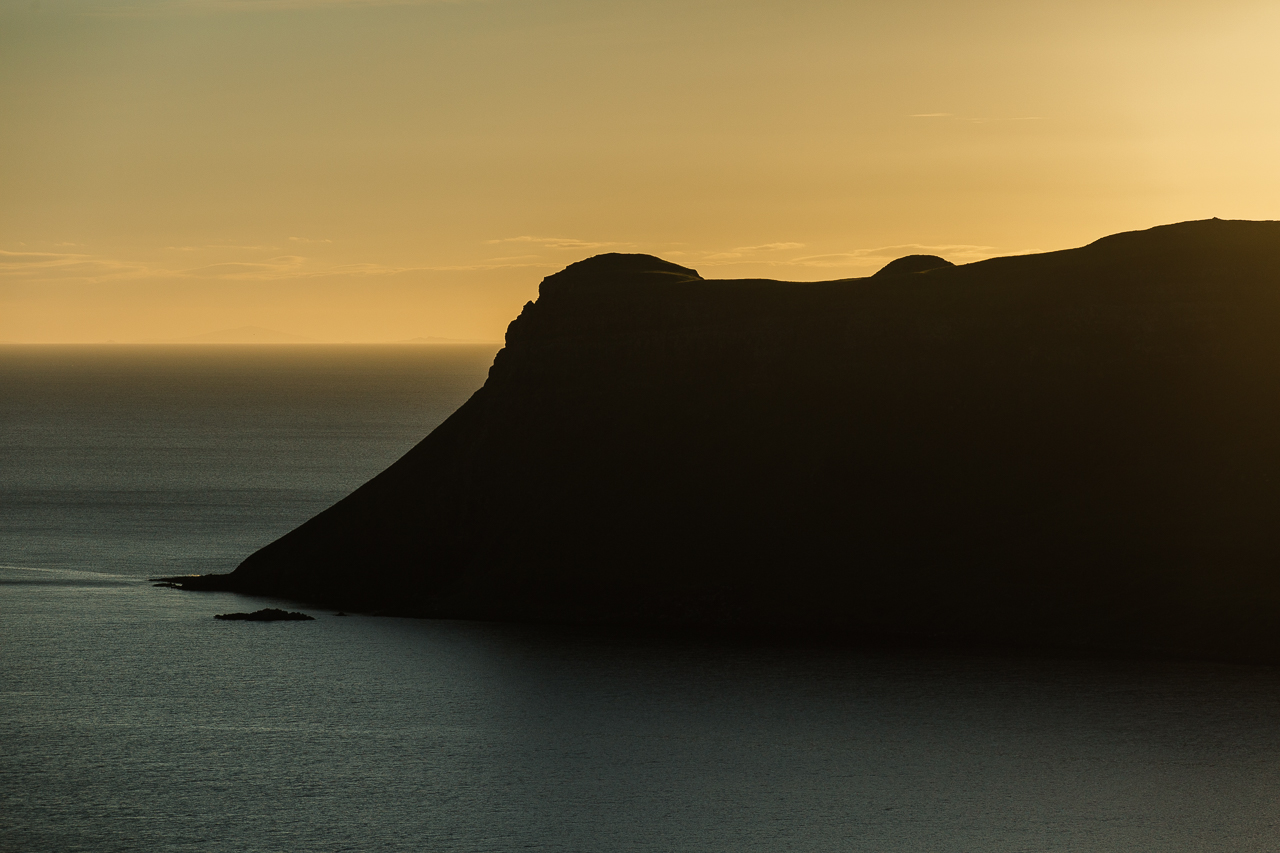 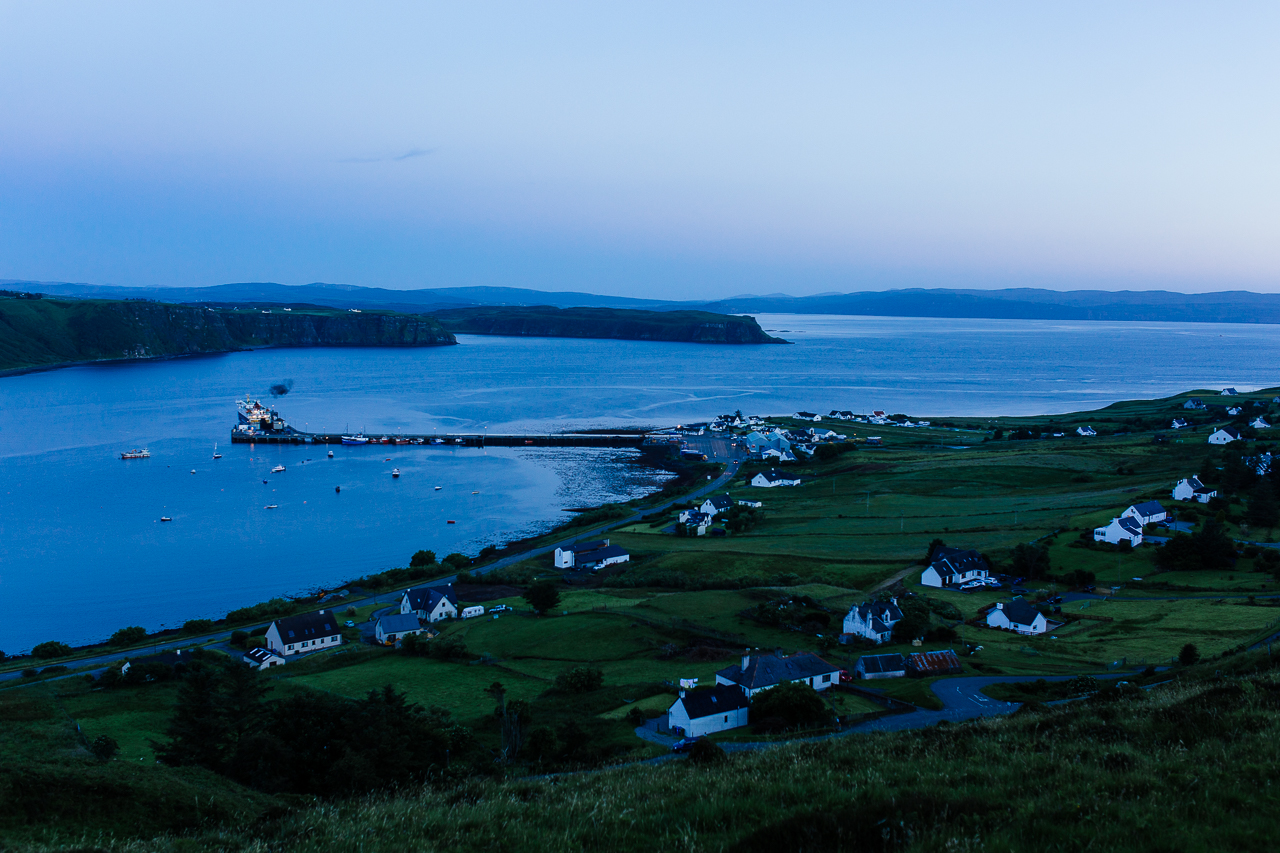 It is rare to be graced with a clear day on the Outer Hebrides, and the day of our ferry trip proves a happy anomaly. There is a saying around these parts – beautiful one day, raining the next. And another: windy one day, very windy the next (NB: sayings may have been coined by the author mid-trip).
After the ferry across from Skye, the real sense of island life hits home as we drive past the wreckages of old farmhouses dotted along the road to Askernish. The population of South Uist – the second largest of the Outer Hebrides islands – is only 1,700 (and in decline). We barely see a soul on the 40km drive to the course. From the Lochmaddy port we set off from North Uist across the bridge to the south. Sheep and goats own the roads here, and prove a formidable obstacle. Lakes and rivers scatter the landscape, with mountain ranges in the distance. We pass signs warning us to look out for otters crossing the roads, but alas don’t catch sight of any.

Though its roots are mythic, the modern incarnation of Askernish began in 2005. Gordon Irvine, a golf course consultant, was looking for a new and exciting destination for a sporting holiday with friends, when he heard that there was a golf course on the island of South Uist designed by ‘Old’ Tom Morris. Irvine found this hard to believe at first. ‘Old’ Tom Morris is the father of golf and most famous for designing the ‘Home of Golf’, St Andrews Golf Course. How could there possibly be another course designed by him so far off the beaten track?

The story goes that Old Tom was lured to South Uist in 1891 by the sheer abundance of land available on which to design the perfect links. After surveying the west coast, he decided that Askernish farm would be the location for his project. In its early years the course was used to bring visitors to the island, and was successfully maintained until 1922 at which point it was claimed by local crofters for their day-to-day pursuits. Since then, the Askernish Golf Club has had a tumultuous history and has undergone many layout changes.

It briefly shared its land with an airport, and when a rocket range moved to the island in the 1950s the course was again awash with players, with army personnel and construction workers making use of it. This continued throughout the 1970s, but as the ‘80s dawned and the workers left the island, Askernish fell on hard times once more, only surviving the next two decades through the dedication of the locals, who maintained it for the love of the game.

Upon Gordon Irvine’s arrival at Askernish, the Chairman of the club Ralph Thompson proved beyond doubt that this was indeed a Tom Morris designed course and, together with Greenskeeper Colin Macgregor, they inspected the land where the original course was believed to have been. Irvine was taken aback by the beauty and quality of the land so much that he declared it ‘the holy grail’ and led the charge for the Restoration Project, formulating a plan of how to bring Askernish back to its former glory. A group of dedicated local volunteers bandied together to raise the necessary funds, and the rejuvenated course was opened in 2008. 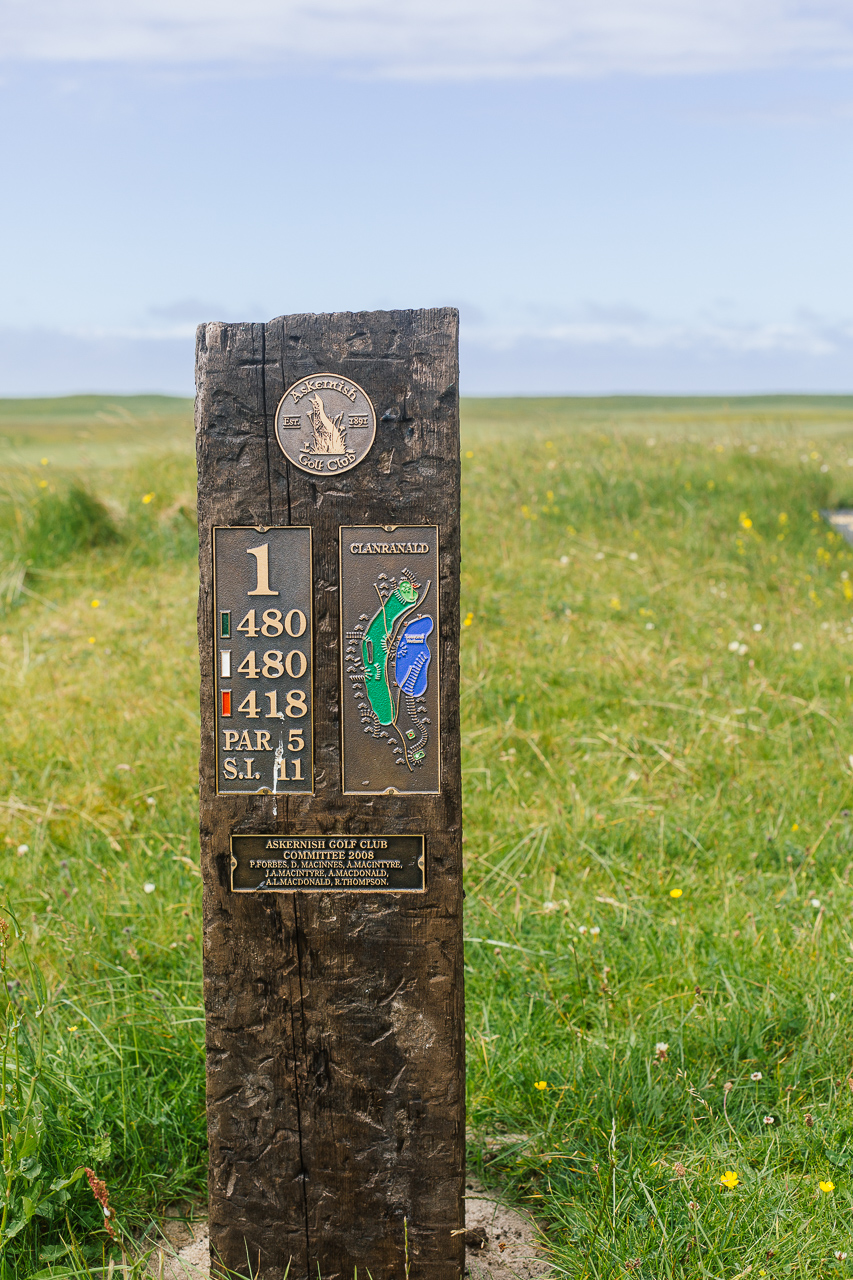 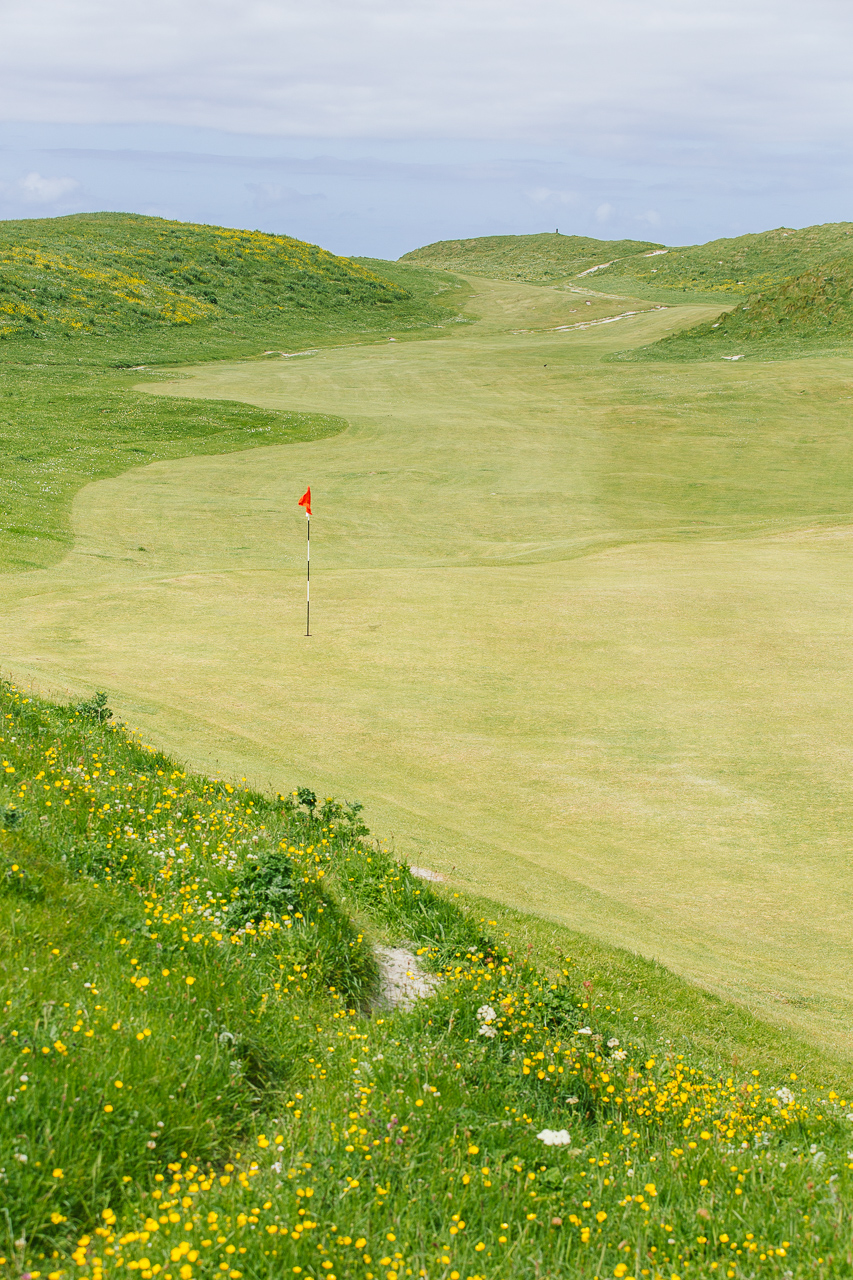 As it stands now, the course amenities aren’t flash, but they’re sufficient. A small course café has just been taken over by a local woman and there are a few items for sale in case you’ve forgotten your gloves or need to buy a few spare balls. We’re lucky we booked ahead, as they’ve only opened up the clubhouse long enough for us to get our hire clubs. It’s a trusting community, and we’re told to leave the clubs around the back of the building if no one is there when we’re done.

Having not swung a club in six months I am a touch nervous on the 1st tee, but the beauty of Askernish is enough to calm even the most fair-weather golfer’s nerves, and the first drive goes straight down the fairway.

From the clubhouse, the course snakes its way out to the west coast. The rough is thick, the greens are more than a little undulating and tricky pin positions mean the course never lets up. Some solid form early culminates in a surprise birdie on the par-4 4th hole. “I’ve got you Old Tom,” I think to myself. But things change by the 6th as we stand on the tee, high on the hill, only the white sandy beaches and Atlantic Ocean separating us from the North American mainland. A narrow fairway awaits, surrounded by thick rough littered with rabbit holes, not to mention the howling winds and endless ocean. Three sliced drives later and I am content to sit this hole out. Losing three balls never felt so good; the usual disdain for the game that settles over the weekend hacker in such circumstances has gone. After all, I am at Askernish, on the course with my wife and two good friends. We have travelled to the proverbial edge of the earth and we have the place to ourselves. A tired swing and three lost balls are not going to get me down. 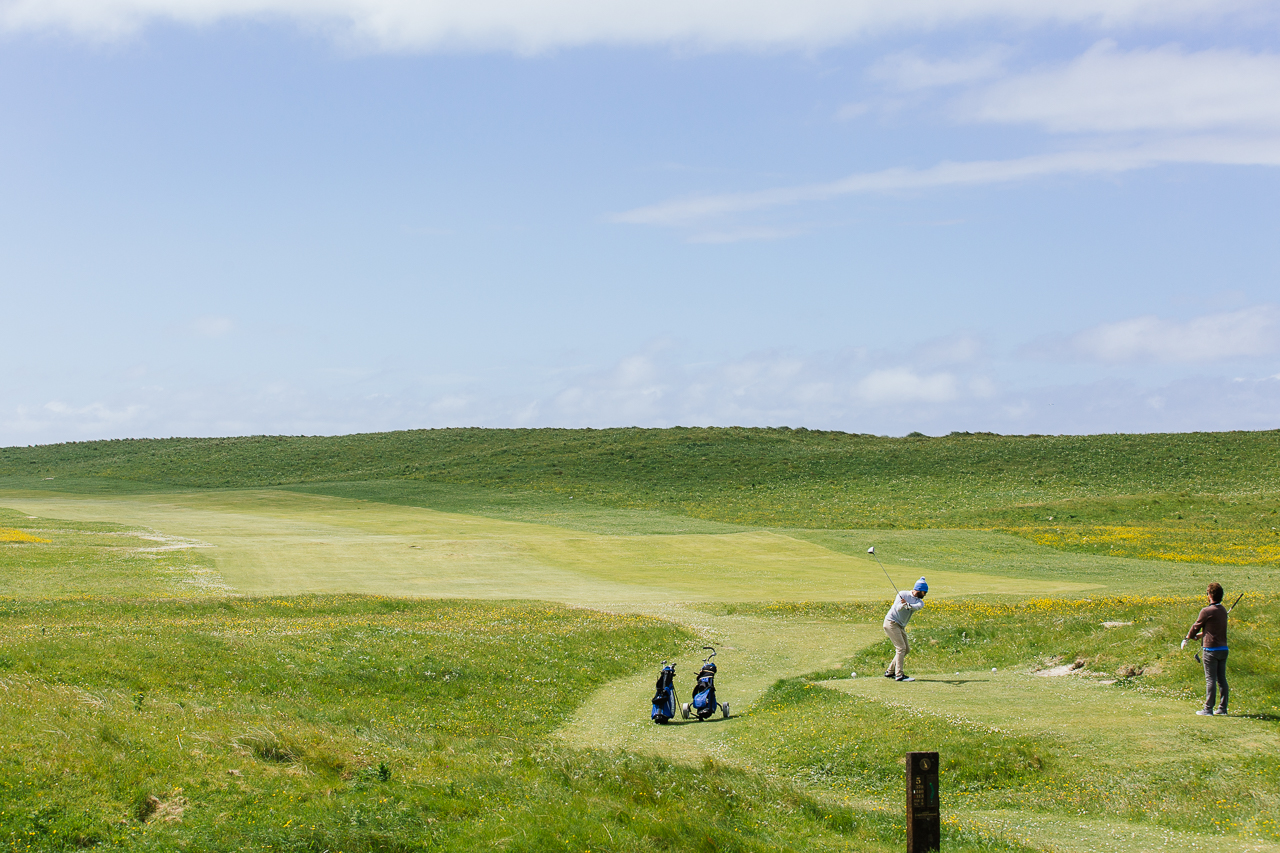 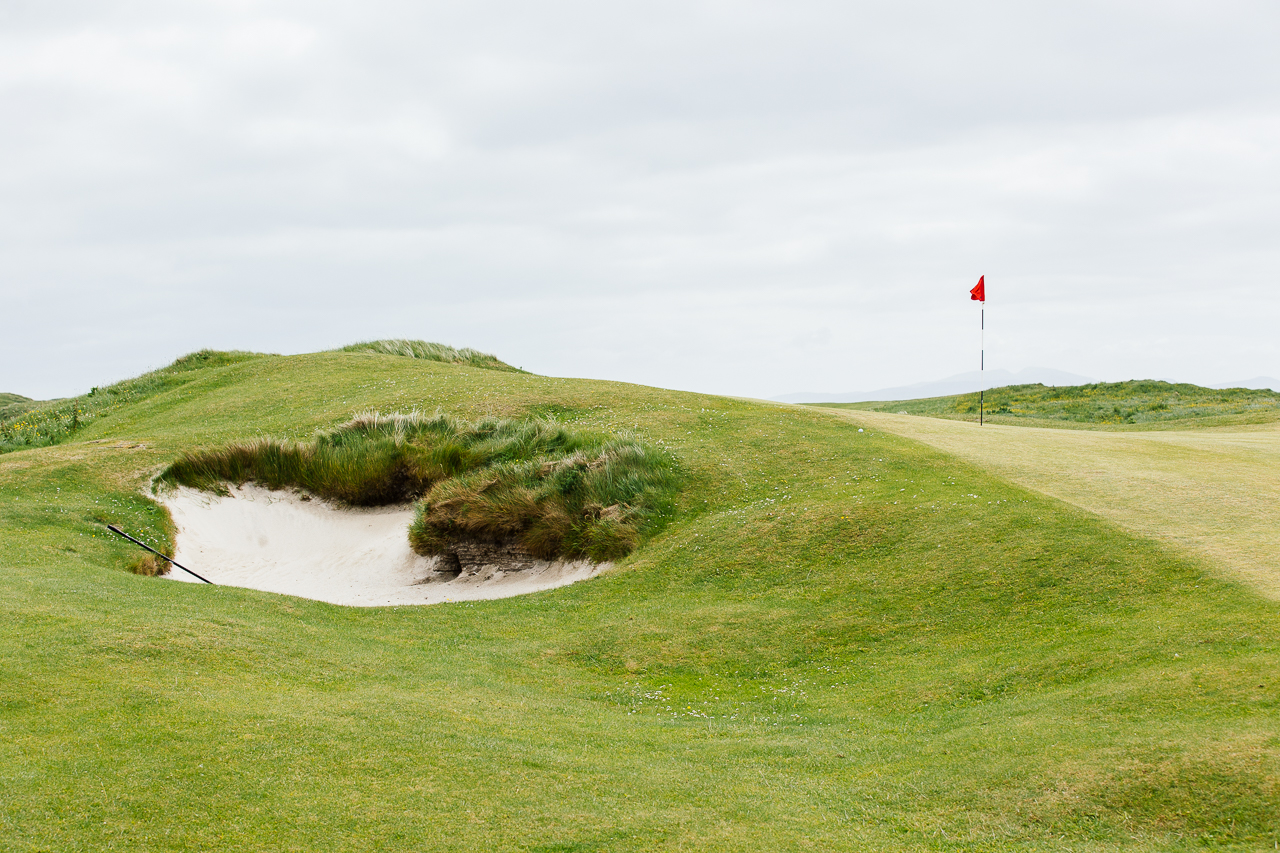 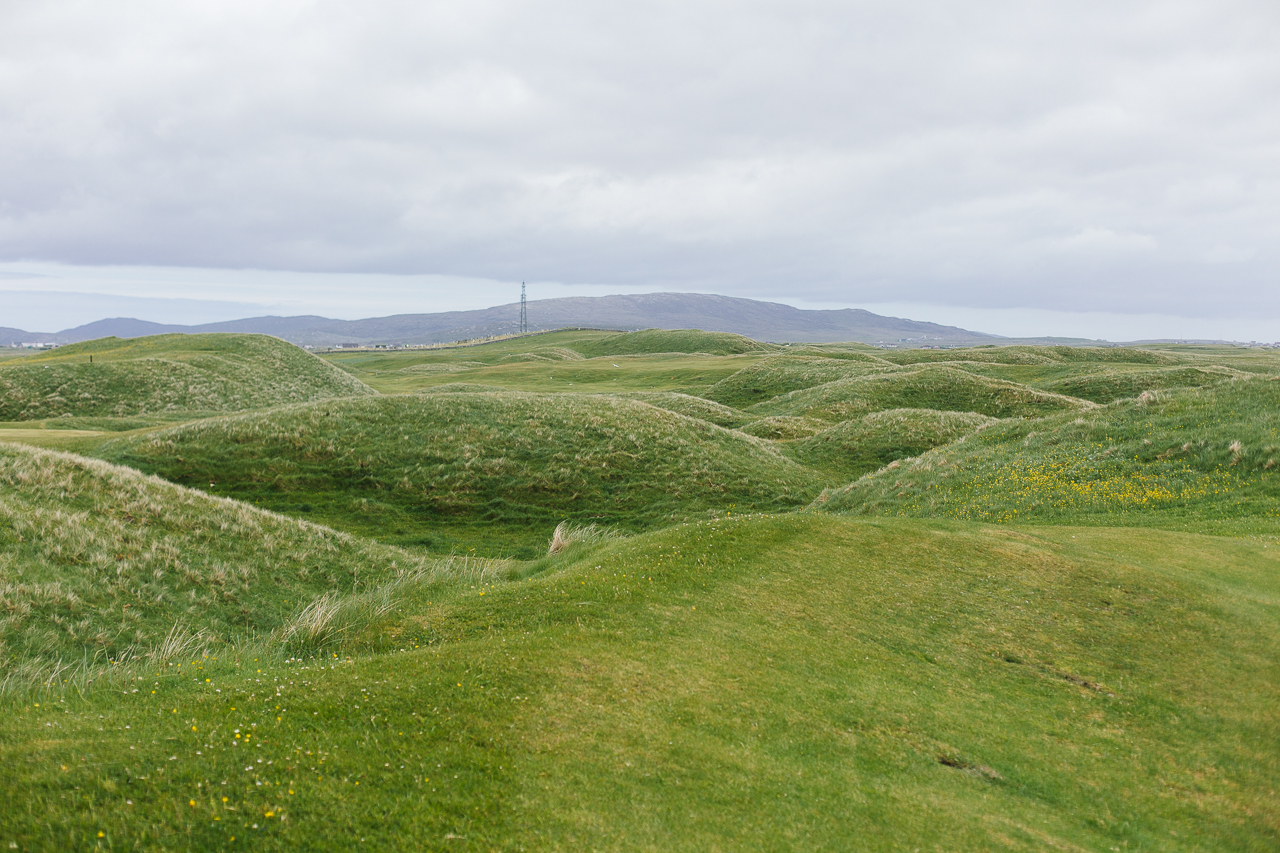 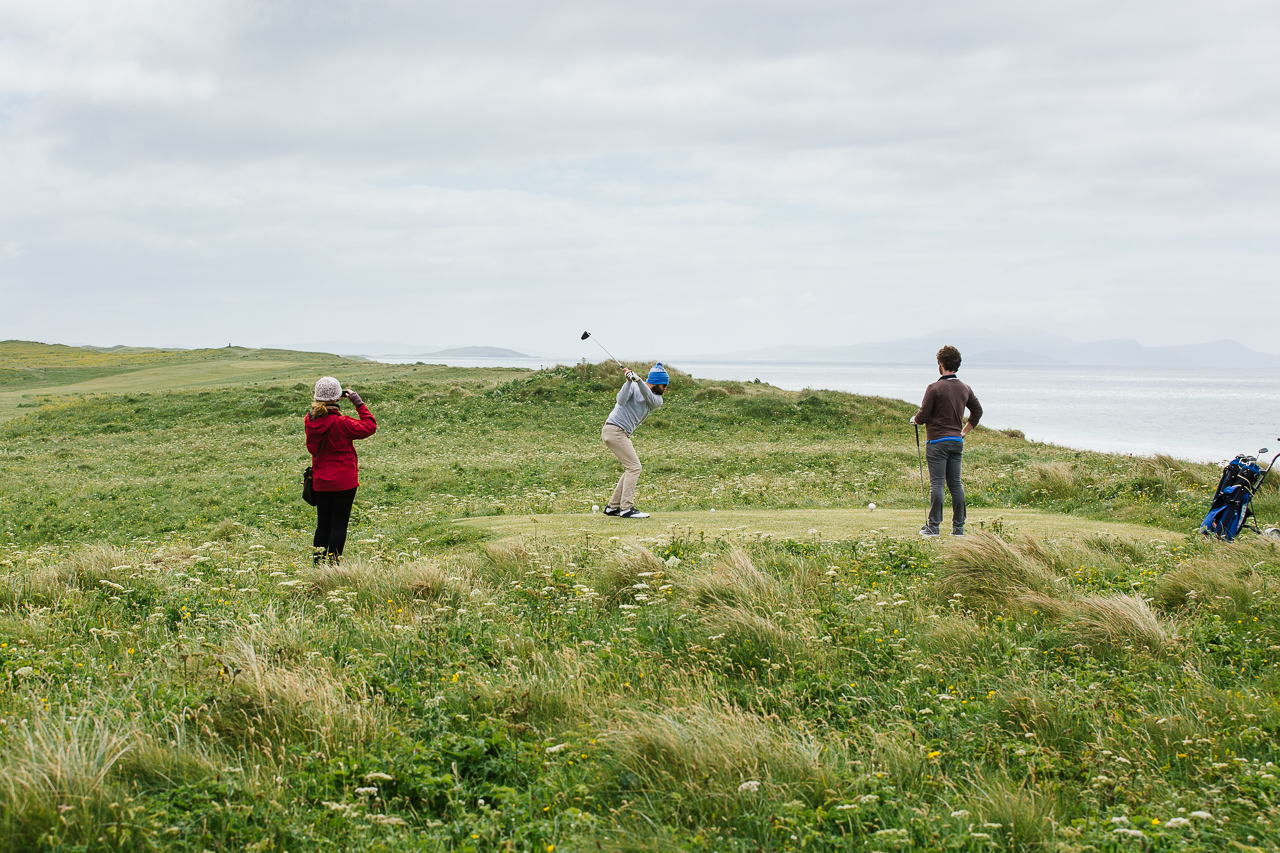 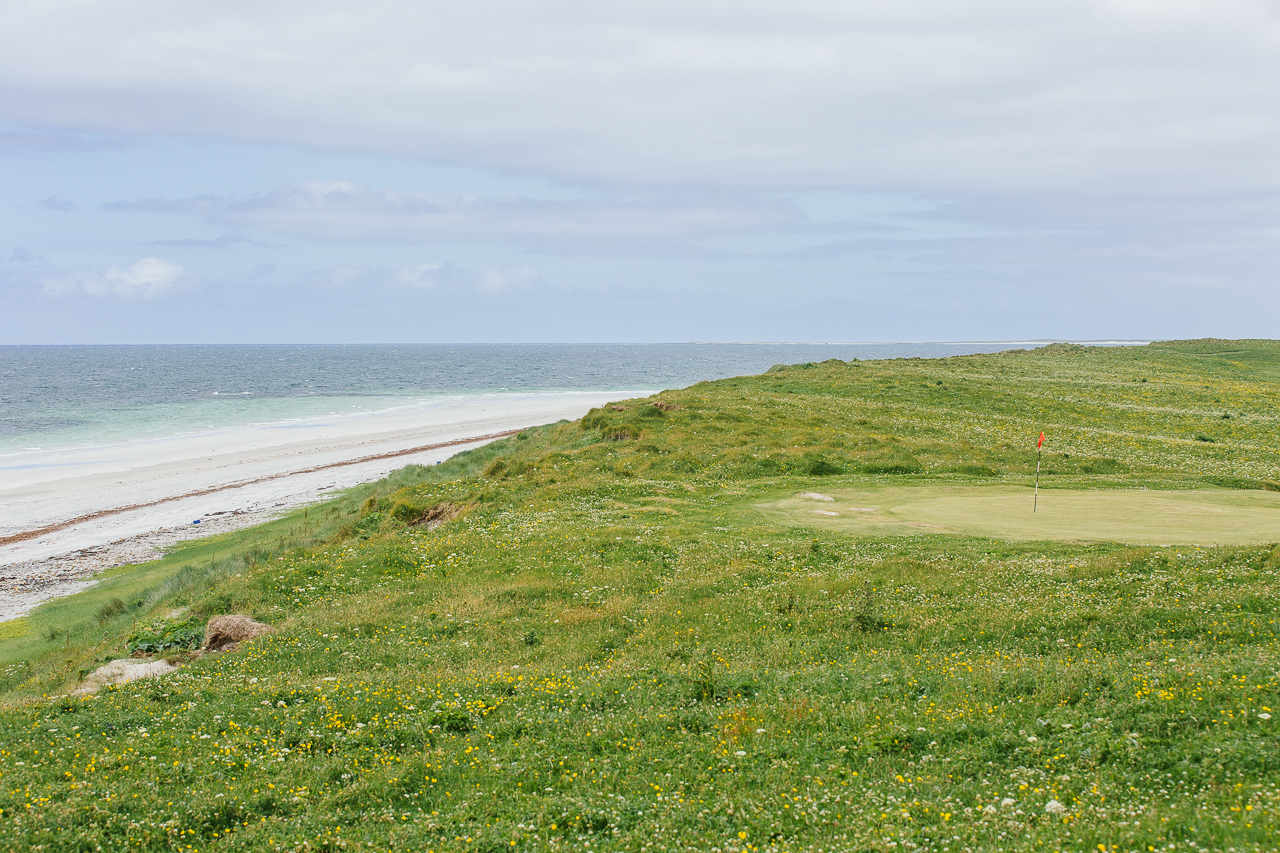 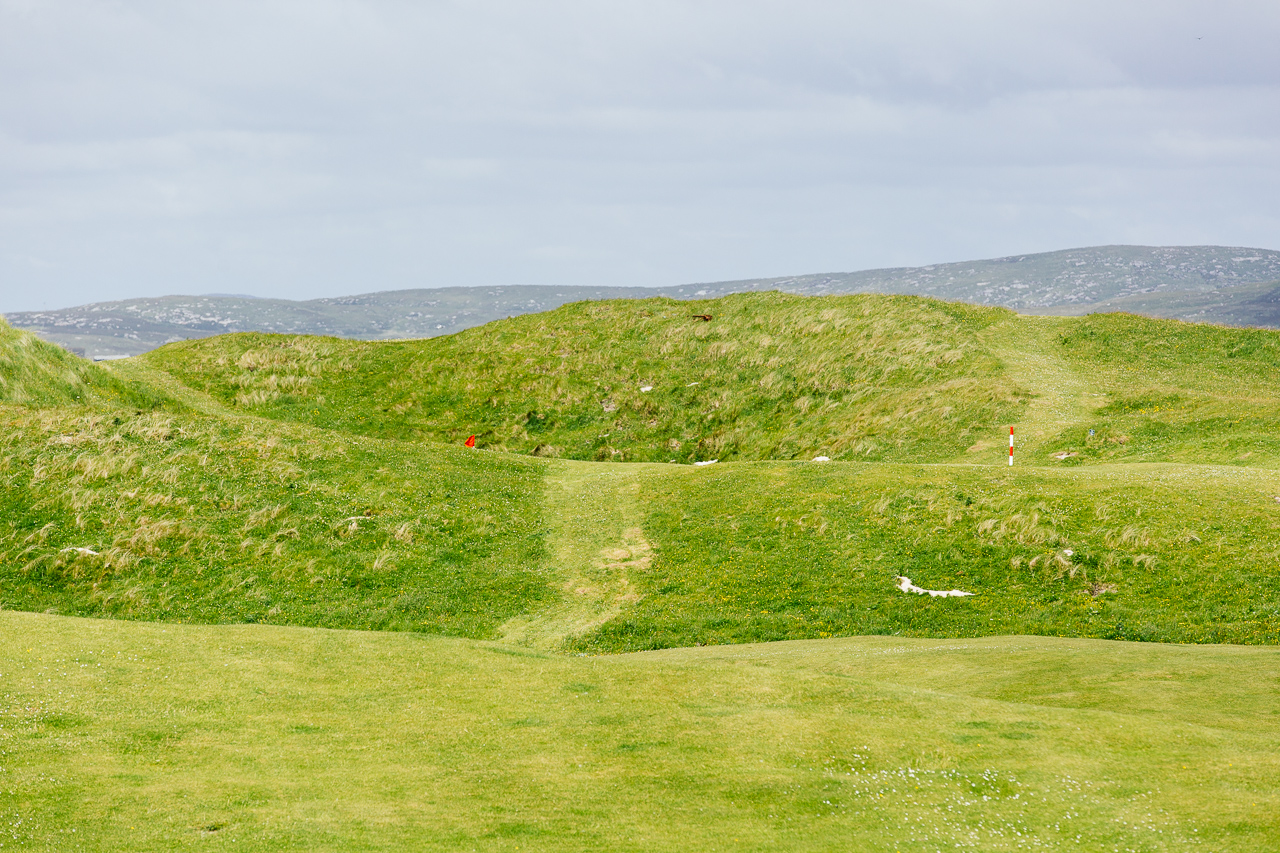 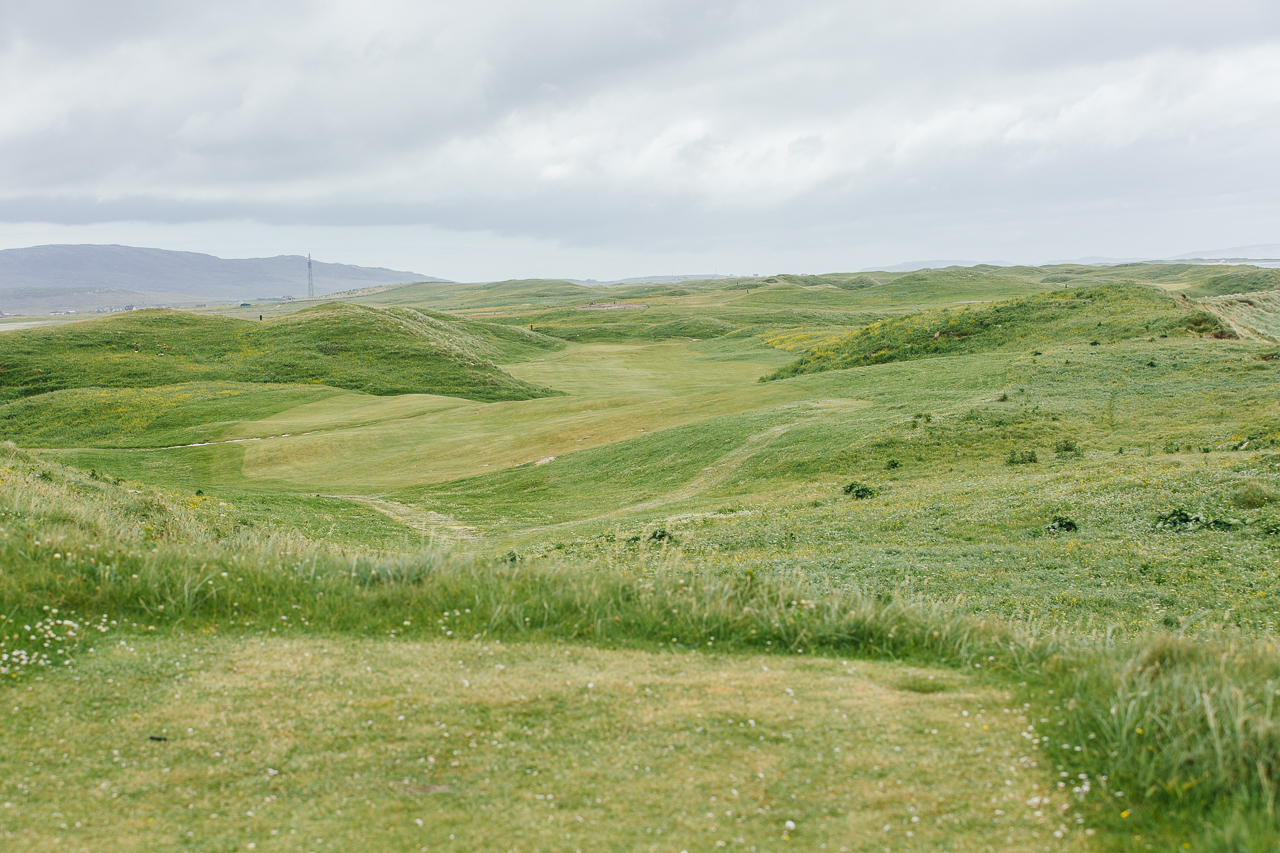 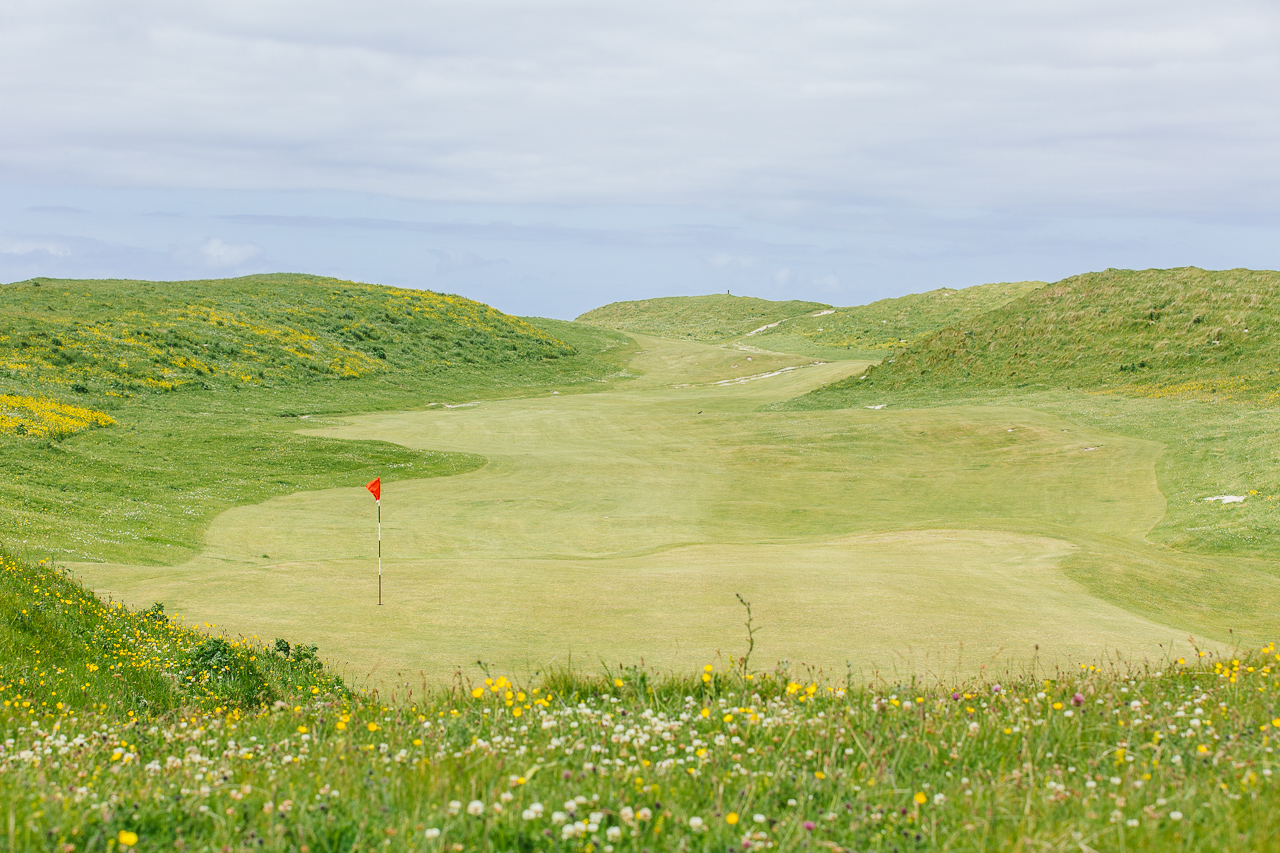 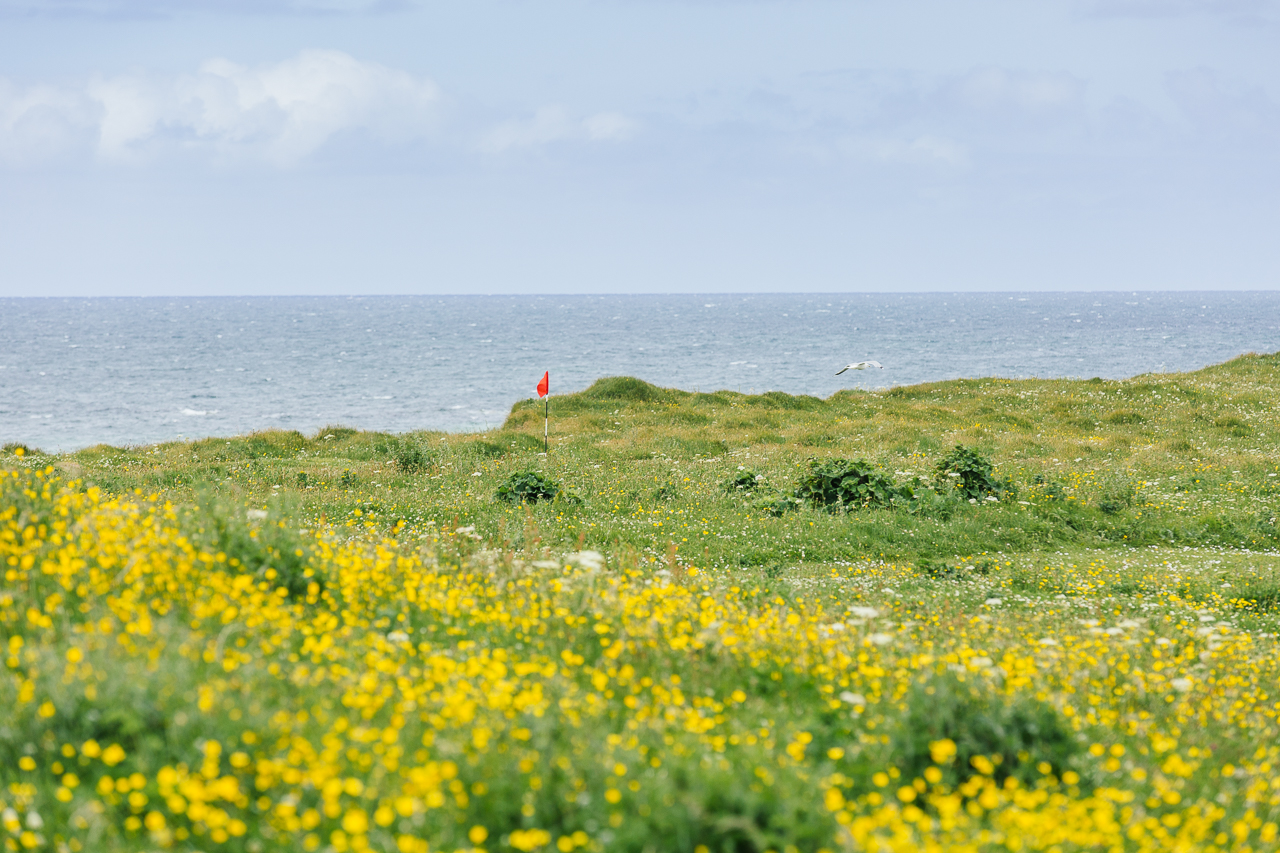 I meet a similar fate off the 7th tee. But we won’t go into that because the 8th brings about another birdie and suddenly my tiring legs and weak grip are a thing of the past. Then comes the 9th… and so the cycle continues. This is no modern course layout – as the 1891 design would suggest – and the seven consecutive holes played along the coastline into prevailing winds are enough to test the resilience of any golfer. It is in the midst of this mid-round stretch that the intangible qualities of Askernish come to the fore. The greatest evidence of this is the fact my wife Anne has a smile on her face the entire time as she walks the fairways with us. Having never walked a course before, her only previous experience with the game was an ill-fated 30 minutes at a driving range care of a bet I won a few years ago. Initially not keen on this out of the way sojourn merely to watch us play, Askernish has won her over.

As we close in on the final few holes, the breeze is at our backs: a welcome relief. From staring down the barrel of the endless coastline, we are now looking across the fields towards Beinn Mhor, the highest peak on South Uist. In the distance we spot a father and his sons playing the first few holes, the only other players on the course. We briefly chat to the only Greenskeeper on duty and meet his dog, Paddy, who follows us around for a few holes. It is as if this is our backyard for the day and our parents have left us to our own devices. In the distance, an old man wanders the fairways collecting golf balls, with boundless treasure no doubt awaiting him in the rough. And so we reach the 18th, a long par-4 back towards the unassuming clubhouse.

Overall, Askernish is not the beast you might think it is. Yes, it is windy and yes, the rough is thick and abundant, but there are not many bunkers and the course is not overly long. This is a gettable course and there are birdies to be had (did I mention my two earlier?) if you can drive it straight off the tee and hold your nerve. In our two-man battle, Will easily won the day – but I had my moments, and can you really compete with a guy who tours golf courses for a living? I think it’s fairer to say that the four of us shared the spoils of a great adventure to the Outer Hebrides. 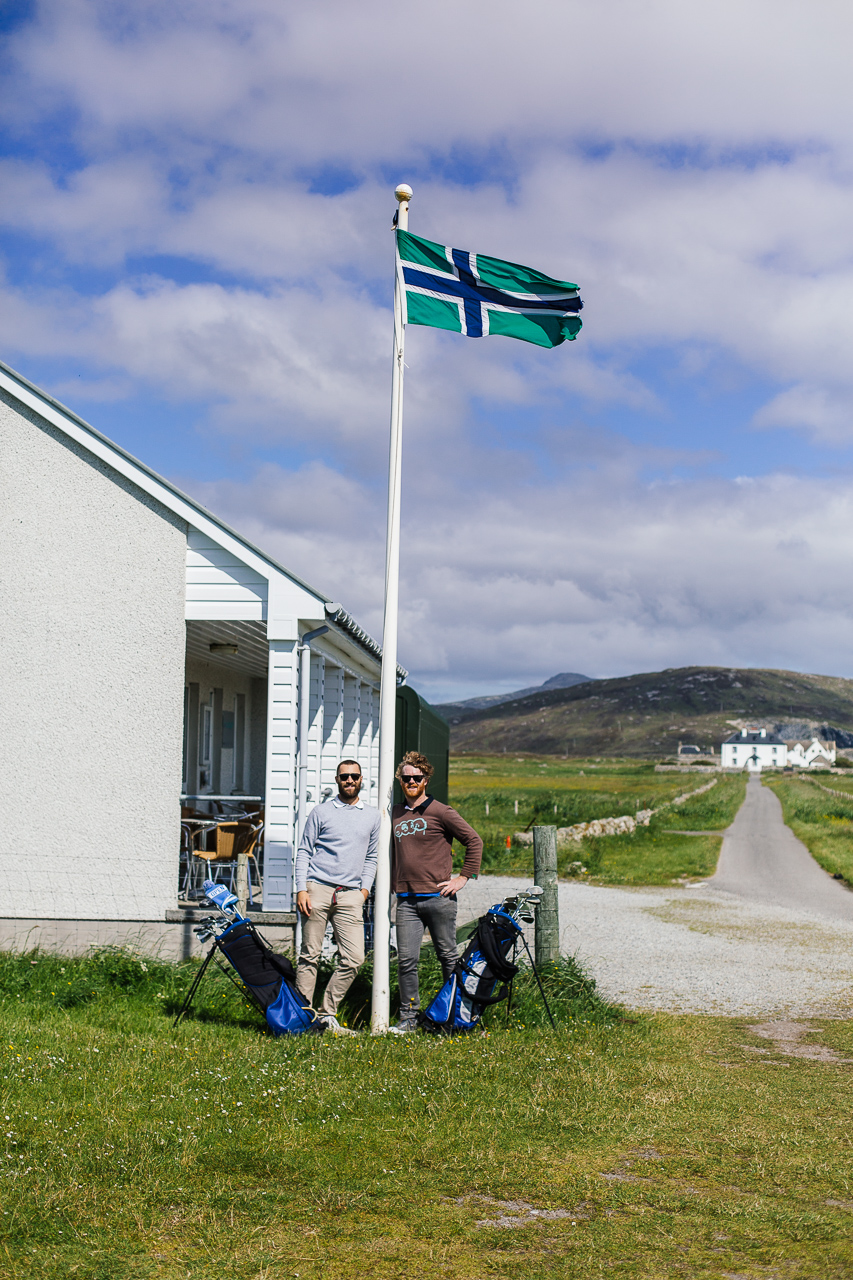 You can have your exclusive courses but give us an Askernish any day. Granted, an experience like this takes a little bit of effort and dedication, as this is not a Sunday drive away from your back door. But there are ‘Askernishes’ all over the world, if you are enthusiastic enough to find them. This is no private club: there is no dress code, the green fees are relatively cheap (about 40 pounds, or 60 with club hire) and there is barely anyone on the course. This is uninhibited golf that allows you to soak in the magic of the great game, while not having to break stride from your holiday. 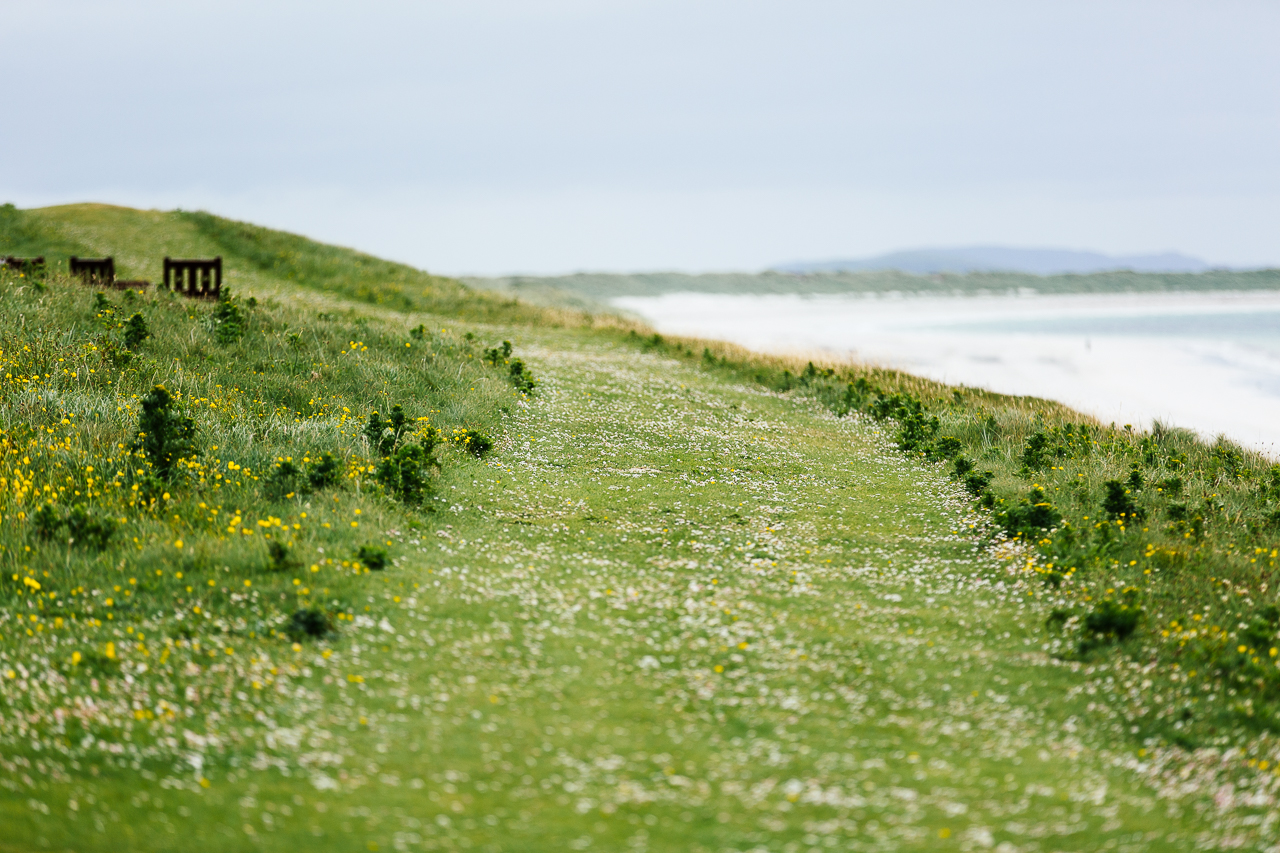