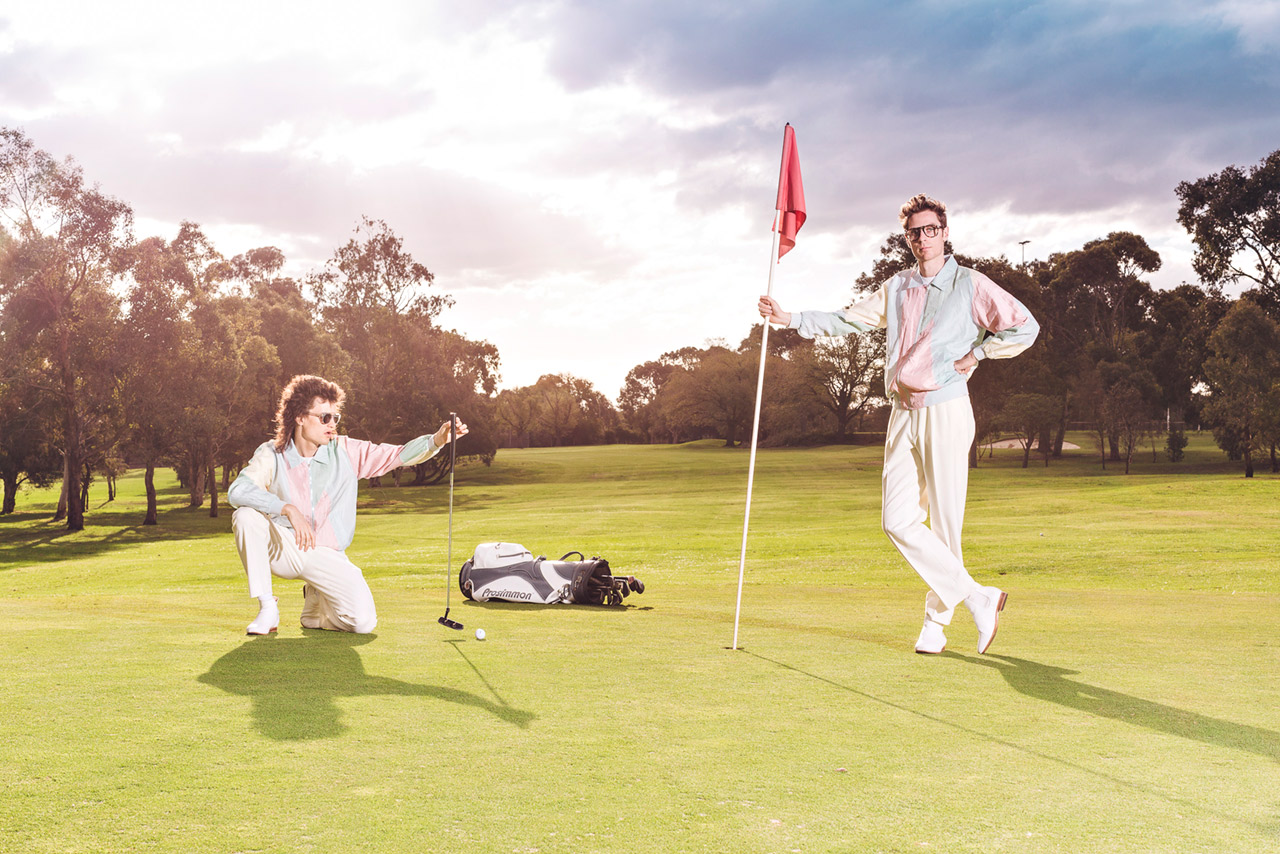 And the parallels go well beyond Norman’s famed feathery locks and Morgan’s own well-coiffed mullet. Much like the golfing legend, Client Liaison is more than just a band.
Making electro music bound up in the slick production of ‘80s pop and early ‘90s house, Client Liaison draw creative inspiration from Australia’s ‘golden era’. A time when Mick Dundee and The Shark were our cultural ambassadors; when beating the yanks in a boat race was all it took to boost the nation’s morale; and when our Prime Minister could (and would) swear like a trooper on live TV.
It’s an era they find appealing for its optimism – a feeling that permeates every aspect of what Client Liaison do. From their kitsch film clips and retro outfits, to their bombastic live shows, there is an unadulterated joyfulness about the band’s ever-expanding universe. A universe, which, both Morgan and Miller emphasise, may be playful but is never taking the piss. “We’re trying to bring seriousness to certain genres that fall by the wayside,” Morgan offers. “We particularly have an interest in a certain sound that correlates to a certain era, but we love it with all seriousness.”
“Our goal is to transcend the irony,” Miller continues. “I guess a popular thing now is to focus on irony, but that’s not what we are going for. And we admit that in the video clips there are some elements that people might find humorous – but it’s not through irony it’s more through absurdity. When you look at someone like Prince who may be on stage in something like a leotard, people aren’t laughing because he owns it. You can go out and be silly, but if there is a conviction about it then it will end up being serious.”
The pair met in primary school but didn’t start bonding over music until much later in the piece when, a few years on, Morgan cleared some room in an old warehouse owned by his Dad and set up a studio for friends to come and jam. It was here that Client Liaison started to take shape. “It was a big empty space, very cold in winter,” Morgan recalls. “In summer, every weekend, we’d bring as many friends and set up a recording space. It was very communal.”
This communal aspect is something that has remained integral to the Client Liaison vision, reflecting Morgan and Miller’s mutual appreciation for music’s great collaborator, Prince. “We’ve always wanted the Paisley Park model – which is Prince’s complex – where you have lots of different people working as part of the one project,” Miller says. And while Client

Liaison HQ doesn’t have all the trappings of The Purple One’s infamous compound in Minnesota, it certainly buzzes with the energy of one whole creative force.
Recently kicked out of their original space, the band’s new digs are located on level nine of a stately heritage building on Collins Street. The perfect façade for a band whose image playfully inverts tropes of corporate excess.
Entering HQ you are welcomed by a large cardboard sign for the now defunct Ansett Australia airline. The company has become somewhat of a mascot for Miller and Morgan since they donned Ansett bike jerseys in their Free of Fear filmclip. Since then fans have taken to wearing Ansett merch at shows, apparently obtained from a guy who was left with a warehouse full of the stuff after the airline collapsed.
It’s almost like a normal office, except here the glass cubicles are bursting with all things ‘Client Liaison’. The band’s main recording studio is located in one, their manager in another, and an open space littered with the usual corporate flotsam and jetsam– stacked boxes, venetian blinds, busted twizzle chairs – is occupied by their stylist, graphic designer and choreographer (all friends of the band) who are working on looks for the next video clip and album. It’s a real hive, the centre of which is the slightly musty smelling costume room which overflows with pastel suits, gaudy shirts, loud prints and ankle boots. “I’ve been collecting clothes my whole life,” Morgan explains, grinning at his rainbow collection. “And now we’ve brought on a stylist. We actually went to Vietnam last year and got things tailored which is great. We used to do it on no budget and now we have a budget.”
Fancy office buildings, costumes and fimclips set in ski resorts — it all appears to be quite excessive, but that is just part of the illusion, insists Miller. “We call it faux-fi. A projection of high fidelity, high-end kind of spec but really it’s done on the dodge, on the cheap.”
Surprisingly timid in person, costumed-up and let loose on stage Monty Morgan is the frenetic, flailing force of Client Liaison’s live show, around which the rest of the band is anchored, the audience often mimicking his every step.

“I always enjoyed dancing,” he smirks. “I would just walk down Chapel Street and if I heard music would just bust in on the dance floor.” His moves are so smooth they were enough to grab the attention of Prince on more than one occasion. A Prince obsessive, Morgan saw him live dozens of times and was just a teenager when Prince first picked him out of the audience to dance on stage with him. What was it that caught The Purple One’s eye? “There weren’t many people my age going to the concerts as enthusiastically or as often as me and I’d always dress up and dance well,” Morgan says. “I guess I stood out.”

The news of Prince’s death broke the morning prior to Client Liaison embarking on their most recent tour, and his passing had a profound effect on Morgan. “The fact that he is dead means you hear his music differently,” the frontman says. “It found new meaning for me, I don’t know why. The day that he died was the day before our biggest tour to date, which was fortuitous I think. And I just listened to Prince for two weeks straight. It was another excuse to celebrate Prince really. It’s sad because that time is over.”

After nearly seven years together Client Liaison are finally gearing up to release their debut album. They are confident it will be stacked with bangers, one of which – Foreign Affair – features a guest spot from one of Morgan and Miller’s musical inspirations: Tina Arena. “(That track) is about travelling around the world and finding lovers in exotic places and it mentions the beach of Sorrento – a tribute (to Tina),” Morgan explains. “We re-wrote the chorus and the range was too high for me, so we got (Tina) in and she smashed it. She heard the song once and just (did it in) one session. It’s quite interesting how her voice changed the whole feeling of it in quite a nice way.”

Just like The Shark, Client Liason are dreaming big and in the future the pair hope to collaborate with former Savage Garden member Darren Hayes or their ‘holy grail’ of Australian artists, John Farnham. And just what will they do if they manage to nab The Voice for their next record? “Write the next national anthem!”

For tour dates and upcoming releases check out clientliaison.com